by Joshua Gay Contributions — Published on Dec 11, 2015 11:51 AM
BOSTON, Massachusetts, USA -- Friday, December 11, 2015 -- The Free Software Foundation (FSF) today awarded Respects Your Freedom (RYF) certification to the Libreboot T400 laptop as sold by Minifree. The RYF certification mark means that the product meets the FSF's standards in regard to users' freedom, control over the product, and privacy. 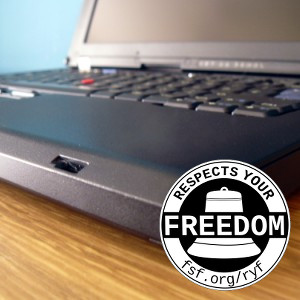 The Libreboot T400 is a refurbished and updated laptop based on the Lenovo ThinkPad T400. Just as with the Libreboot X200, in order to achieve the Free Software Foundation's RYF certification guidelines, Minifree had to replace the low-level firmware as well as the operating system. Microsoft Windows was replaced with the FSF-endorsed Trisquel GNU/Linux operating system, which includes the GNOME 3 desktop environment. The free software boot system of Libreboot and the GNU GRUB 2 bootloader were adapted to replace the stock proprietary firmware, which included a BIOS and Intel's Management Engine firmware.

The mission of both Libreboot and Minifree is to push the free software movement forward in a fundamental way, at the hardware and firmware level.

"While we don't require that companies selling Respects Your Freedom certified products also develop or fund free software projects directly, in the case of Minifree, sales of their products do directly fund the Libreboot project. It is doubly exciting to be able to endorse a new freedom-respecting hardware product while also encouraging people to support the development of an important free software project," said FSF's licensing & compliance manager, Joshua Gay.

"We call on more people and companies to get involved with Libreboot development. We also need hardware manufacturers to cooperate. This is a long battle, and one that the Libreboot project has taken on. We're doing this because we believe users deserve to have full control over their own computing, and the freedom to share with others," said Leah Woods, founder of Minifree and lead maintainer of Libreboot.