You are here: Home › Resources › What is Free Software?

What is free software?

by Matt Lee Contributions — Published on Dec 29, 2009 02:41 PM
This is a flyer/handout made by the FSF to educate the public, especially newcomers to free software about the philosophical and ethical reasons behind the free software movement, GNU and the FSF.

What is free software?

Free software is software that respects our freedom. To use free software is to make a political and ethical choice asserting our rights to learn and to share what we learn with others.

Usually software we buy denies us these rights, because we don't actually buy ownership of the software. Instead, we receive a license to use the software, and this license binds us with many fine-print rules about what we can and can't do.

If we make a copy and give it to a friend, if we try to figure out how the program works, if we put a copy on more than one of our own computers in our own home, we could if caught be fined or put in jail. That's what's in the fine print.

What if there were a worldwide group of talented ethical programmers voluntarily committed to the idea of writing and sharing software with each other and with anyone else who agreed to share alike? What if anyone could be a part of and benefit from this community even without knowing anything about programming? We wouldn't have to worry about getting caught copying a useful program for our friends—because we wouldn't be doing anything illegal.

In fact, such a movement exists, and you can be a part of it. The free software movement was started in 1984 by Richard M. Stallman, when he launched a project called GNU, which stands for ``GNU's Not UNIX'', to provide a replacement for the UNIX operating system—a replacement that would respect the freedoms of those using it. Then in 1985, Stallman started the Free Software Foundation, a nonprofit with the mission of advocating and educating on behalf of computer users around the world.

Today the number of people who are not computer users is dwindling all the time, as technology seeps around the globe. It takes knowledge to make this technology work. People who hoard this knowledge, punishing and threatening others who try to obtain and share it, are not doing so in order to preserve it, despite what they may claim. Instead, they are preserving power for themselves at the expense of others' freedom.

Recognizing this, millions of people around the world—including entire governments—have made the commitment to use only free software on their computers. The fact that so many people are willing to make and stand by this decision in the face of cheaper and cheaper ``deals'' from Microsoft, Apple and other proprietary software companies proves these companies wrong—we don't need them or their fine print to make software.

Because the copyright laws covering software are often used to take away our freedoms, Stallman and the FSF developed a specific legal document called the GNU General Public License (GPL) to protect them. Instead of restricting what we can do with software the GPL encourages us to learn and share, so it is called a ``copyleft'' license. Thousands of people and businesses—from hobbyists to big companies like IBM and Novell—are now authoring and distributing free software using the GPL.

But which software to use is a political choice for all of us, not just the people who program and sell it. We can click our freedoms away by signaling Ok in the Microsoft or Macintosh window after squinting through their thirty pages of restrictions, or we can click Cancel, and see instead if there is a piece of free software that does what we need.

We should click Cancel when we can because that's the more ethical choice. This means we'll have to learn a new program, and sometimes the free program might not work as well. The ethical choice is not always the easy choice.

You can start by making a commitment to look for free software alternatives. The Free Software Directory lists over 5,000 free programs.

There are many other ways for people with and without programming skills to help the free software movement continue to succeed. Please see the websites of the Free Software Foundation and the GNU project, to find out how.

And of course, please make copies of this information and share it with others! 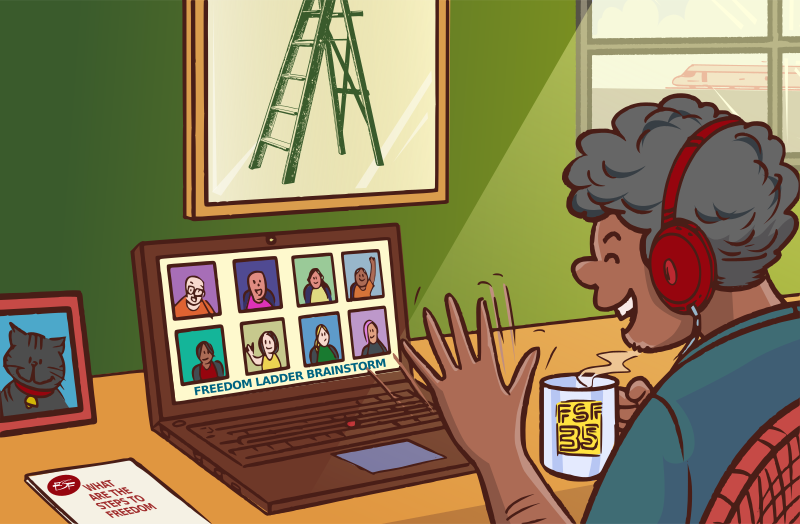