by Matt Lee Contributions — Published on Sep 02, 2011 11:48 AM
Thanks for taking one of our CDs in Boston. We've put together a few short notes on getting started with the CD.

The CD you have is known as a "live" CD, which means you can run the software directly from the CD to try it out without permanently installing it. On most computers, you can just put the CD into your CD/DVD drive and restart your computer.

When you're done, just remove the CD and restart the computer.

If the CD doesn't load when you restart the computer, you may need to press a key (usually F12) to tell your computer to load from a CD.

What's on the CD? Wikipedia just one of millions of websites and organizations that use free software.

The first round of CDs from September 2011 contain GNU/Linux, which is a complete operating system used by millions of people worldwide instead of Windows or Mac OS X. With this system, you can surf the web, write documents, send emails, edit your photos and play games... all the things you'd expect, in fact.

What makes our software different is that it is free software — software which respects your freedom.

Free software is even used by organizations such as Wikipedia, the Department of Defense, the New York Stock Exchange and the European Organization for Nuclear Research, CERN.

We're the Free Software Foundation, a 501(c)(3) charity formed in 1985 right here in Boston. Our founder and president, Richard Stallman, started working on the GNU operating system in September 1983 when he resigned from MIT to dedicate his time to free software and the free software movement, a social movement based on the ethics of software freedom. Our small staff works tirelessly with the wider free software movement to promote, protect and further the social goals of sharing and other user freedoms.

As a charity, we are primarily funded by free software users and developers who support our mission and our work. 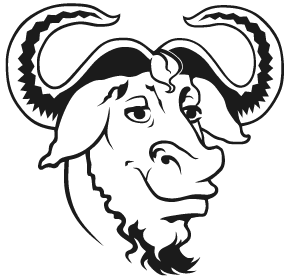 The bold GNU head is just one of the stickers you received. The GNU head is the mascot of the GNU project.