Old but not forgotten

Through a complicated series of events, I briefly ended up in a situation where my only working computer was one of the FSF's Lemote Yeeloongs, the first fully free software-compatible netbook ever released. Those who have been in the free software community for long enough will remember how coveted this machine was back in the "bad old days" of free software, when systems compatible with a free BIOS were even more rare than they are today. Even in 2008, just what it could do was severely limited by its single-core 800MHz processor and somewhat meager amount of memory. Videos online can also attest to its whopping three and a half minute boot time. All of this coupled with the Yeeloong's other quirks make it a good opportunity to reflect on the state of free software on older machines. 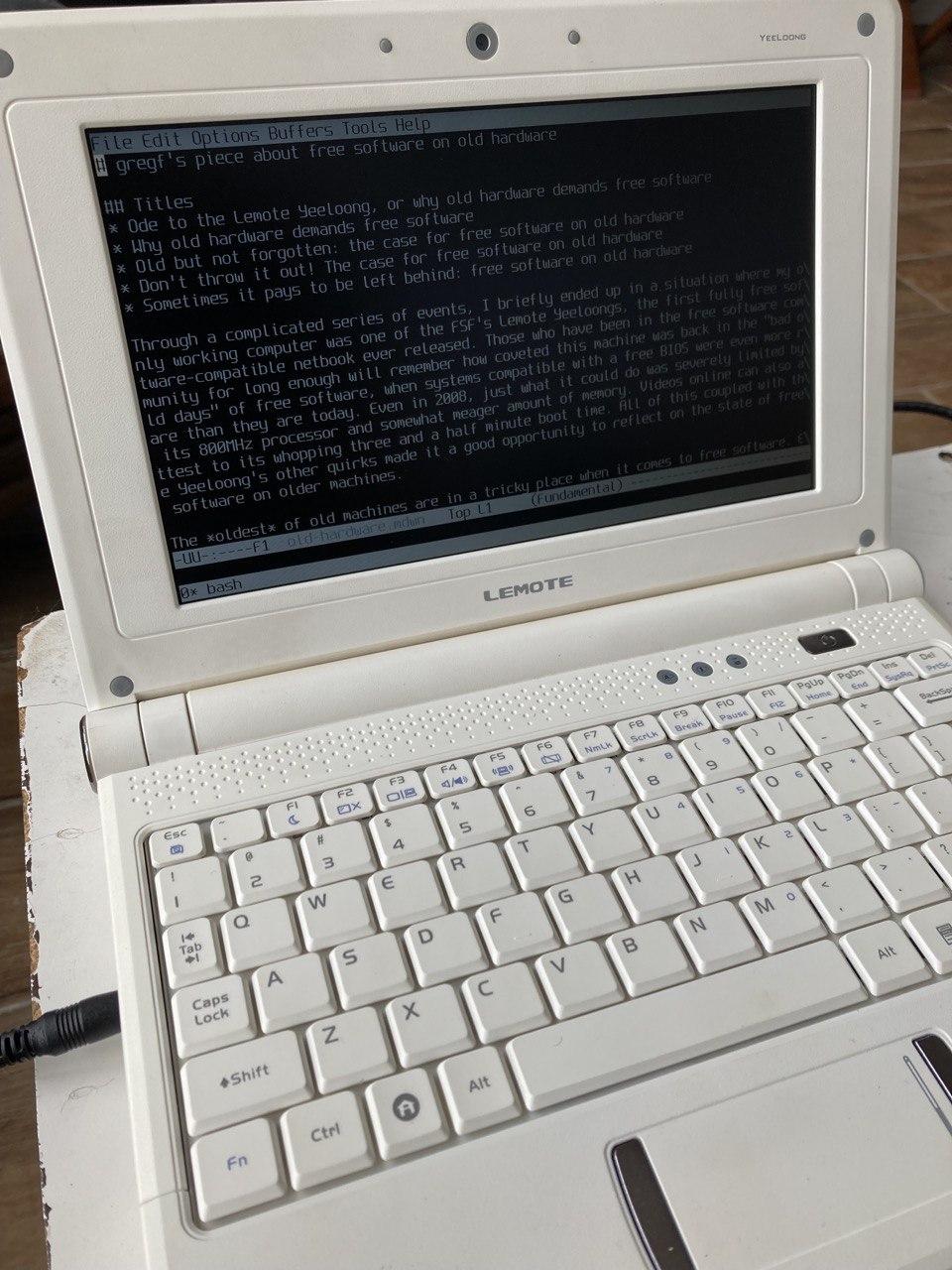 The oldest of old machines are in a tricky place when it comes to free software. Except in extremely rare circumstances, the days when the kernel Linux could fit on any kind of floppy disk are long behind us. Yet given that the "top of the line" when it comes to laptop freedom is a different machine released in 2008, the X200, and that most FSF staffers run Trisquel 10 on these machines, one would assume that the Yeeloong is similarly well-supported. Well, this isn't the case. You see, the Yeeloong isn't just an old machine. It's an old machine on a very rare architecture: mipsel64.

As all GNU/Linux distributions and operating systems generally are limited in the number of CPU architectures they can target, this puts the Yeeloong at even more of a disadvantage when it comes to support. From the day of its release, it never supported nonfree operating systems like Windows, but now, even most free systems have left it behind. The Yeeloong I used ran an installation of Parabola GNU+Linux that is now too old to update, and while I sketched the outline of this article, support for the Yeeloong and related systems were dropped from OpenBSD, one of the only distributions of that operating system to have ever supported it. This leaves the Yeeloong in the lurch. Without significant manual intervention, it can no longer receive security and software updates, and given its rarity, likely never will again.

This invites the question: what can the Yeeloong do nowadays? Recently, and for arguably good reasons, "retrocomputing" has come into the spotlight in certain sections of the free software community. Most of these experiments are centered around, or at least feature use of, the "small web" — old or alternative network protocols like Gopher, Gemini, or Spartan. Although it was something of a challenge to get a client compiled on the Yeeloong, it's well suited to use cases like these. It's no surprise that older protocols like Gopher pare a user's browsing experience down to text, but Gemini, a protocol that is only just finalizing its written standard, is also a good way of keeping connected while avoiding what we've termed the JavaScript Trap. By design, Gemini pages are forbidden from executing programs on a user's machine. Positioning itself as a middle point between a protocol as "lightweight" as Gopher and one as "heavy" as HTTP, Gemini takes the Web back to its roots in simple hypertext, albeit with some baked-in TLS and support for other media formats.

TLS? Therein lies the rub for these old machines. Even if the Yeeloong's processor could support the JavaScript transport behemoth known as the modern Web, without an up-to-date implementation of key security components like Pretty Good Privacy (PGP) or Transport Layer Security (TLS), it can't be trusted to escape any recent vulnerabilities that might compromise a user's privacy and security. The most I ever did with the Yeeloong was browse a few simple pages with the text-based Web browser W3m, and, in a fit of nostalgia, return to it to hash out the first draft of this FSF Bulletin article. I won't pretend that the Yeeloong's obsolescence has left a large number of users without a safe, free, and reliable computing environment, but it does point to the need for "outdated" and rare architectures to be supported for as long as possible.

Too often, we're led to think that newer technology is intrinsically better than anything that came before it. If you're reading this Bulletin, you most likely know that this isn't the case. The advertisements put out by Apple and its ilk don't take the time to mention what advancements (or encroachments) it makes to your freedom or ability to do a particular task. If you splurge for that new computer, chances are that you'll be browsing the same Web sites, writing the same types of documents, and engaging with the same kinds of media as you did with the old one. Independent of the environmental or economic reasons why someone might stick with an older machine, there's an argument from simplicity: if the machine you're currently using does all that you need, why should you feel somehow "pressured" to buy a new one?

Naturally, paring down your computing environment doesn't need to involve purchasing a different set of hardware, even if that hardware's old and "outdated." Living the retro experience can be as simple as choosing not to boot to X11 or Wayland, and getting as far as you can with your daily tasks on a shell like Bash running in the framebuffer. For every user who chooses to take this approach, there are at least ten laptops in varying states of repair languishing in the dumpster or electronics recycling shop. As most of my own machines are sourced this way, I should know! No matter what circumstances have brought you to that blinking cursor on that old machine, I hope you'll spare a thought to their upkeep, whether that's ensuring the program you develop is able to be compiled on old or rare architectures, or simply loading an old laptop up with GNU/Linux, and passing freedom on to a friend.