GHM 2022 in Turkey: A personal reflection

The following is my personal reflection of this year's GNU Hackers' Meeting (GHM) and how we were able to organize an enjoyable meeting against all odds. Enjoy!

According to its definition on gnu.org, GHMs are "a venue to discuss technical topics related to GNU and free software."

While it is true that the (more or less) annual GHMs are structured as "conferences" with presentations and slides -- very technical indeed! -- if we look back at every year since their beginning in 2007, we find that GHMs are mostly for the fun of spending time with our GNU friends in a relaxed environment. 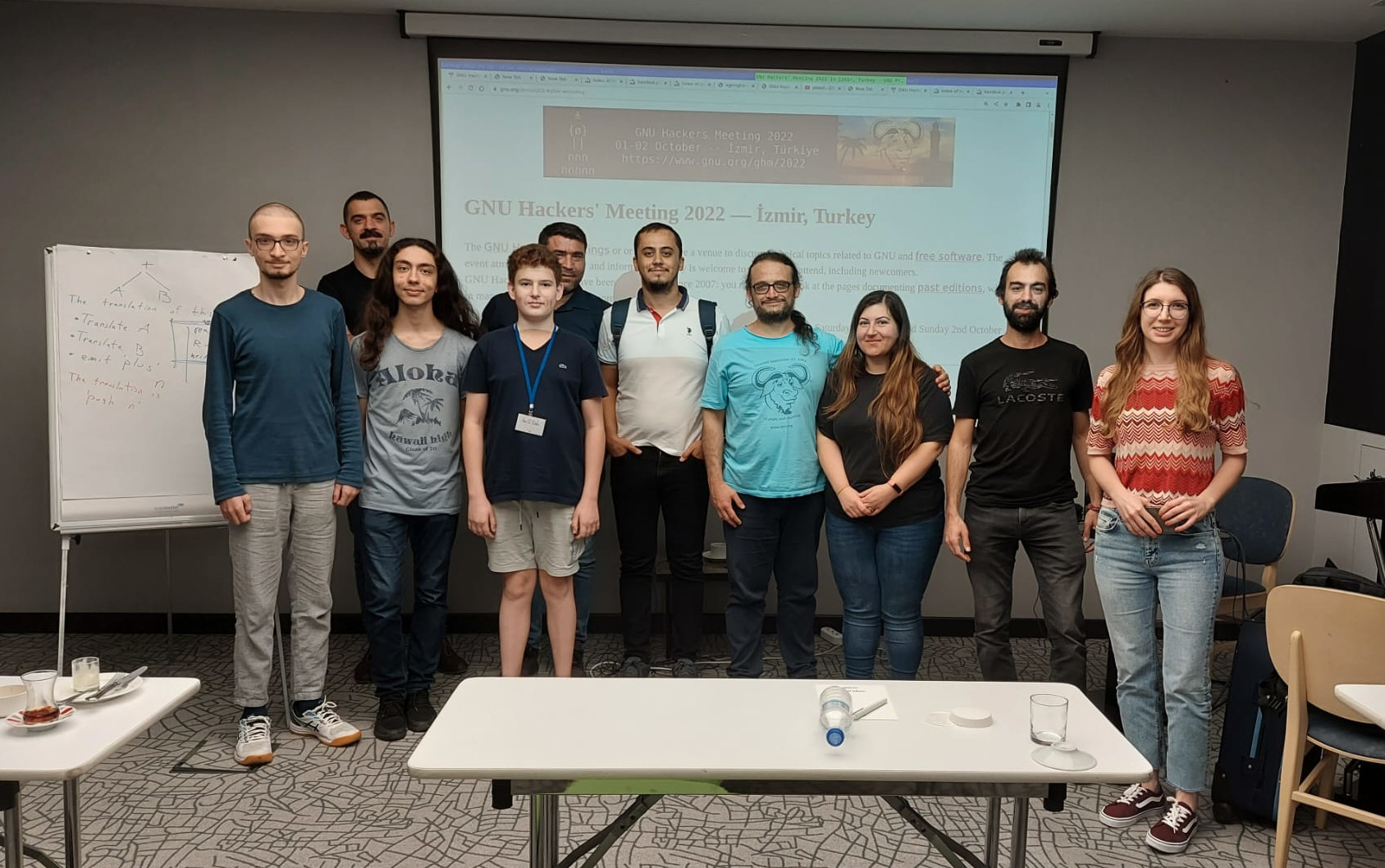 After many years in which most GHMs took place in Europe for no particular reason other than us regulars living in Europe, we opted to hold GHM 2022 in Turkey: https://www.gnu.org/ghm/2022/

There have been various volunteer organizers over the years. This year, I organized the talks, schedule, Web site, and most of the remote communication with participants. Since my wife Egeyar Saiu is not only a capable computer scientist but also a practical person who speaks Turkish and knows the region, she dealt with the hotel and restaurants. Ege also proposed the dates and location: October, because the weather is pleasant that time of year; and İzmir, a large university city on the Mediterranean coast. Planning the GHM was tiring, but it all worked well in the end.

And then, of course, the main reason for a new venue: to reach new people. We hoped for locals to see the announcement about a GNU meeting nearby and attend out of curiosity, and those people may become friends and contribute to some common project.

Several people from İzmir reacted to my announcement with great excitement. However, in the end, only a few people in Turkey could attend in person, so we resorted to some remote and pre-recorded presentations. Thanks to our good ol' friend (and master hacker) José Marchesi, we were able to stream most of the event live.

Ege and I arrived in İzmir beforehand to test the equipment at the venue. The following day, we were joined by José and by some early attendees for the pre-event dinner. While there, we had a surprise: two of the participants, with whom we had exchanged only emails prior, turned out to be younger than we thought: thirteen and fourteen years old! Both were running GNU/Linux on their laptops and spoke good English; they were not expert programmers (yet), but eager to learn. It turned out they already understood the free software philosophy very well.

The next two days were dedicated to the conference itself. Of the attendees, some were professionals: expert embedded programmers, for example. There was one older student, obviously very knowledgeable; a couple of newly-enrolled students about to begin their university careers -- one a Lisper, who asked several deep questions; the other an enthusiastic, committed but shy fellow, who eventually found the courage to give a talk after my Jitter workshop. He did it and promised to improve his English in advance of the next hacker gathering. My take: "It was already awesome, friend."

Sometimes we had to improvise in order to overcome a technical difficulty such as when our server connections dropped; our loudspeakers squeaked, we lost a cable, and we were unable to stream one presenter who uses only the terminal console. ...Looking back at it now, I smile at that chaos, which has blurred into a cheerful memory.

Near the entrance, we covered a table with free software stickers for the attendees and their name badges, each card prepared with my pathetically old printer, and then cut and inserted (manually by me) into a plastic holder. And even if our hackers' table was nowhere as perfect as the hotel's flawlessly arranged snack spreads, one must at least concede that our hackish organization was sincere. That sincerity is worth something.

The Web page now contains most video recordings and presentations slides. But recordings do not tell the whole story. Anybody interested in participating (or assist with organizing) is welcome to subscribe to the ghm-discuss mailing list at https://lists.gnu.org/mailman/listinfo/ghm-discuss and join us next year!

Recent blogs
Thank you and a very warm welcome to our new members
Join LibrePlanet 2023 behind the scenes as a volunteer
Associate members are invited: Nominate new candidates to the FSF board
Sharing knowledge about the GNU family of licenses
Recent blogs - More…