You are here: Home › Bulletins › 2021 › Spring › Thinking clearly about corporations 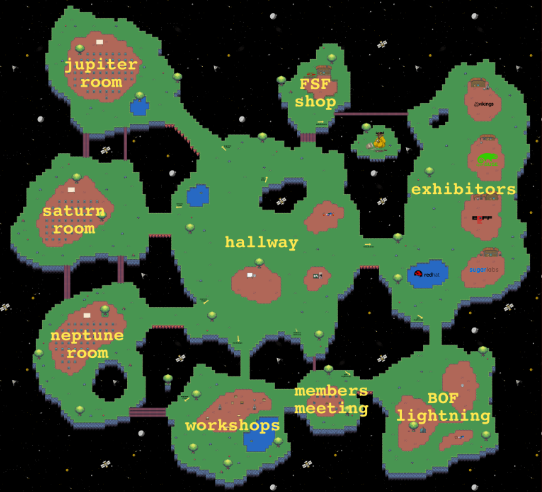 The map for the LibreAdventure online virtual world, created for LibrePlanet 2021.

For software to be considered free, its license must allow for commercial use and redistribution. Yet, free software as a social movement is to a large extent a struggle against for-profit corporate control of our lives.

Instead of telling companies they are not welcome in free software, we say they are welcome if they follow the ethical principles -- the Four Freedoms. In our engagement with them, we see both positive and negative impacts. We also see some parts of the community being overly solicitous of corporate support, and other parts describing even seemingly positive actions as necessarily part of a long con to eventually extinguish free software.

We need to think clearly -- somewhere between these extremes -- about corporate involvement, neither falling over ourselves to invite it, nor being so endlessly suspicious that we miss out on valuable contributions and ultimately fail to change the practices of a significant sector of global society.

Clear thinking begins with seeing for-profit corporations for what they are: for-profit organizations. They are not individuals. A company's behaviors can change dramatically, not just from change in the individuals they employ, but also from changes in leadership, ownership, or business circumstances.

These are not hypothetical concerns. In free software, many eyes are now on Red Hat, to see if its behavior toward free software will change as a result of being bought by IBM. We saw Redis Labs switch some of its software from a free license to a nonfree one which ironically prohibits commercial re-use. We've seen Google in the past decide to withhold the source code for Android. We've seen Microsoft switch from publicly calling free software a cancer to saying "We are all in on open source."

Companies can commit valuable resources to actions that benefit the free software movement. They can hire developers, sponsor events, fund advocacy and education, and provide infrastructure. Individuals can convince their employers to release code under a free license, and to distribute it with their products. They can even persuade the company to pursue certification under the FSF's Respects Your Freedom program.

These contributions are meaningful. The challenge is, how do we realize them while avoiding the ways corporations can hurt free software? We need to avoid financial dependency, keep our standards high, and rely on a solid legal framework rather than vague trust.

Avoiding financial dependency means making sure our operations as free software projects and organizations won't be seriously harmed by a corporation withdrawing its support due to a disagreement or an ownership change. As an example, while we appreciate and make productive use of all the direct corporate patron support we receive at the FSF, in our last audited financial year, it was less than 3% of our total revenue.

To keep standards high, free software projects and organizations should be conservative in what we offer in return for contributions. As with any donation, specific public recognition and appreciation can make sense. But selling conference keynotes, for example, takes the interaction out of the realm of a donation and makes it a transaction. Plus, when some events offer the moon in exchange for sponsorships, it puts more pressure on other events to do so.

Relying on a solid legal framework means relying on copyleft, and on explicit, enforceable statements about who holds relevant rights when a contribution is made by the employee of a company. The GNU General Public License (GPL) has enabled decades of constructive engagement, because it requires companies to give back improvements they distribute, under the same terms to everyone, and its terms don't change even with new company leadership or after an acquisition. For certain GNU packages, the FSF gets additional assurances, in the form of copyright assignments and employer disclaimers, to help make sure we can effectively uphold these license terms according to the Principles of Community-Oriented GPL Enforcement, and can protect all of the program's users from patent or other ownership claims by contributors' employers.

We should stay watchful and firm on these points. Over the last year, I have seen firsthand multiple cases of Google employees encouraging projects to relax their license from the Affero General Public License (AGPL), because of Google's wrong-headed policy forbidding any involvement by employees with AGPL projects. If you receive pressure like this from any company, stay strong and explain how copyleft is in the best interest of all contributors to the project (also, tell us your story at info@fsf.org).

A person is capable of moral commitments outside of legal agreements, but accountability for companies works differently. This position isn't based on conspiracy, or on assumptions about corporate employees. It is based on relating to for-profit companies as the kind of entity they are. If we avoid dependency, keep our standards high, and ensure the terms of our work together are copyleft, we can edge the corporate sector ever closer to fully embracing free software, which will in turn help us move all sectors of society in that direction, securing freedom and autonomy for all.

On a personal note, I'll be finishing my term as FSF's executive director before the next issue of the Bulletin is published, so this will be my last article. It's been an honor to appear here, to have had this chance to contribute to important ongoing conversations in this community. We'll be publishing details about the transition to a new executive director on fsf.org. Please continue supporting the work of the FSF's incredible staff, some highlights of which are described in the rest of this issue -- and all the future issues to come!