You are here: Home › Bulletins › 2021 › Spring › Looking back on LibrePlanet over the years

Looking back on LibrePlanet over the years 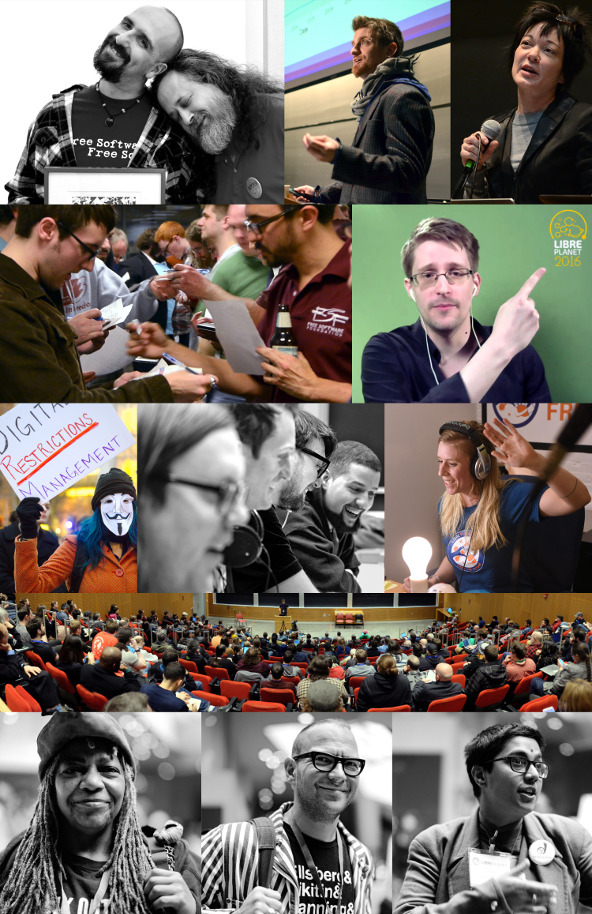 A collage of photos that Ruben has taken over nine years of LibrePlanet conferences.

I had my first chance to attend in 2012, at the University of Massachusetts Boston campus. It was my first ever visit from Spain to the United States, a wonderful adventure! I finally got to meet all the FSF staff and volunteers behind the IRC nicknames, and they were incredibly welcoming. I was even asked to open up the event with a short impromptu presentation of Trisquel GNU/Linux (a project I founded in 2004), a terrifying honor.

The 2014 conference, at the Massachusetts Institute of Technology Stata Center, opened with a keynote by Sue Gardner, Wikipedia's outgoing executive director. A few minutes into the keynote, I took pictures of my FSF sysadmin friends sweating over a technical glitch with the slides and projector, not knowing that one day karma would punish me for my amusement. They promptly resolved the issue, and we enjoyed a wonderful conference.

By 2015, I felt like a regular. Attending LibrePlanet was about visiting friends. Catching up at the FSF office open house event before going for Chinese food with a side of activist chat, taking lots of pictures, and watching so many wonderful talks had became an annual (re)treat.

This routine ended when I joined the FSF staff in 2016 as a senior sysadmin, and immediately set myself to improving the recording and streaming process; the tech team also runs the projectors and slides, as well as the sound system, IRC channels, and networking setup of the venue. And it was a tall order: the opening keynote would be Edward Snowden, in conversation with Daniel Kahn Gillmor, live from Russia over an encrypted bi-directional videoconference, and recorded and published in real time via streaming. Despite weeks of testing, on the day of the keynote, karma caught up with me, and the setup refused to work during the preparation time. I had one of the most stressful experiences of my life: standing behind the podium of a large conference room with over three hundred people silently watching as I tried to untangle the problem, hearing every keyboard press echo across the room. But it all was solved, and the event was a success!

In the following years, thanks to the tech team growing in staff, volunteers and interns -- including David Testè, who wrote dedicated recording and streaming software to replace the clumsy GStreamer scripts we had used in the past -- the workload became more manageable, and during calm moments, I would sneak out of the control room to enjoy bits and pieces of talks, and take many pictures. Some of my favorites are a series of portraits taken in 2017 with a medium-format film camera as old as myself, featuring Sumana Harihareswara, Cory Doctorow, and Micky Metts (at the bottom of page 5).

This steady routine was broken in the 2020 edition, since very close to the event, the COVID-19 pandemic forced us to reshape the conference into a fully remote one, which sadly left few opportunities for pictures. You can read about my team’s strategy for running a fully online conference at https://www.fsf.org/blogs/community/how-to-livestream-a-conference-in-just-under-a-week.

Although I will not be working on the conference next year, I'm looking forward to attending it for the tenth time -- hopefully back as an in-person event -- so I can see my friends and colleagues, hang out at the FSF office party, go on hackathons and workshops, and of course, take a lot more pictures. I hope to see you there!