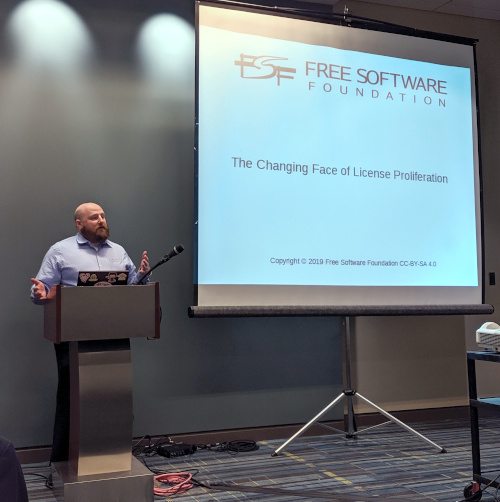 Thirty-five years ago, the Emacs General Public License brought about the age of copyleft. It was a revolutionary concept, for the first time ensuring that once software was released freely, it would always remain free. Copyleft licenses achieve this by turning copyright law on its head, requiring that distributions of the software, or modified versions of it, be released under the same terms. These terms guarantee that everyone is free to run, study, modify, and share the work or their own modifications to it.

This novel concept was further developed in the GNU General Public License (GPL), enabling the enduring success and growth of the GNU operating system, which in turn supported the rise of the Internet. Keeping everyone on a level playing field incentivized sharing and collaboration, which led to the incredible world of free software we see today, as well as other massive projects like Wikipedia. While it's easy for us to see how this is a boon for society, over the years, there have been those who opposed copyleft, pushing for lax licenses that would allow proprietary developers to take what the free software community creates and lock it away. As most large software companies have come to embrace free software in their products, the push for lax licenses has become even more pronounced.

So what does copyleft look like today, over three decades after its creation? And what does the future hold for it?

Copyleft is still incredibly popular. Developers widely choose to protect the rights of users, with thousands of packages licensed under the GNU family of licenses alone. Legal professionals are also still developing new copyleft licenses, with varying degrees of success. Even where a GNU license doesn't exactly fit their client's needs, they still want to gain the benefits that copyleft provides. Other communities concerned with ethical technology are increasingly looking to copyleft licensing as a tool for social change -- providing a starting point from which to talk to them about the importance of the Four Freedoms (see: u.fsf.org/2zo).

But popularity alone doesn't mean the success will continue. Fads can come and go, although something lasting for thirty-five years could hardly be called a fad! Those who want to integrate free software into their own locked-down proprietary systems will continue to call for the demise of copyleft, but the future of copyleft lies in the structure of the concept itself.

At its core, copyleft is a tool to perpetuate freedom, and in doing so, copyleft also perpetuates itself. When users enjoy the benefits of the sharing community that copyleft creates, they are nudged to appreciate the concepts, and want to give back and share in the same way. When the license ensures that you have access to the source code, it enables you to study it, modify it, and extend it. When access to source code is left up to the whims of a distributor, it shrinks the potential community that can build upon that software. When software is locked up in proprietary cages, the future is very dim for that software indeed. In contrast, by its very nature, using copyleft begets more copyleft users and developers.

That doesn't mean we can just sit back on our laurels. Copyleft created a world of free software, but to interpret that as a sign that it's no longer necessary would be a big mistake. There will always be those who try to hoard software, hoping to stifle the world copyleft created. We all need to keep working together, sharing our software, and asking that others also share in freedom. We hope that the next thirty-five years are as vibrant and productive as the last.