by Matt Lee Contributions — Published on Dec 07, 2007 08:44 AM
Rob Myers is an artist, hacker and free culture activist who has been remixing images and coding up art for more than fifteen years. He held the first solo all-copyleft-licensed art show, has been involved with community projects such as Free Culture UK and Remix Reading, and has advised on corporate projects such as "Where Are The Joneses?" and "4Laughs." 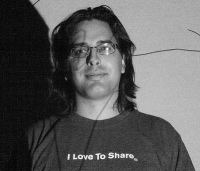 Matt: Rob, you are known to many for your commentary on free culture, both on and offline. I imagine you interact with this community a lot, what is that like?

Rob: It's always good to find out how free culture touches on different people's interests, not just activists'. One of the best discussions of music copyright I've had was with the driver of a bus I was on who turned out to be a Beatles fan and knew about the George Harrison "My Sweet Lord" case. Another time I spoke to an artist at her private view who'd almost lost her funding for that show because the funding body wanted her to track down every single copyright holder and get permission from them for all the found video footage she'd used.

People have different views on how free culture should be approached, and discussing my own views with others is a way of learning about the issues and keeping honest. Finding out how things are different around the world helps to keep a sense of perspective as well. When I talked about Creative Commons licenses in Serbia, people just laughed and told me that copyright didn't apply there. In the UK the activity around the Gowers Review Of "Intellectual Property" was very positive.

Matt: As an author, both online as well as in occasional printed form, what are your thoughts on ebooks and ebook readers like the Amazon Kindle?

Rob: As someone who has been through art school and designed books and other materials for print, I really appreciate the different qualities of paper and ink. I love finding an old Art & Language monograph in a book stall. But I also enjoy being able to get classic texts from Project Gutenberg and read them or search them or feed them into a Markov chain. And having reference works in electronic format is very convenient. I think eBooks complement and extend what is possible with physical books rather than replacing them entirely.

What breaks the commercialization and wider adoption of eBooks, the same as it did for digital music formats, is DRM. I've owned physical books with anti-photocopying printing or with restrictive licenses printed in them and that is bad but it is nothing compared to DRM.

Kindle, as well as being a horrible piece of industrial design with a disempowering user experience, is encumbered with DRM. I just hope that Amazon follow the same path, away from DRM, that Apple seems to be following. But that will take competition--and with a few notable exceptions, the other eBook vendors all seem to be using DRM as well.

I want DVD-style special editions of print books as eBooks, I want the potential of hypertext to be realized, and I want a good platform for generative literature all on something like a Kindle but with industrial design by IDEO and software by GNU. I don't want my old ASCII files uploaded to Amazon, made useless by the addition of DRM, then downloaded to something that I'd be embarrassed to be seen on the tube with.

Matt: What do you think of tivoization? What does it mean for free culture?

Rob: I don't understand people, usually developers, who want to privilege Tivo's ability to modify software that wasn't their's to start with over the freedom of the actual users of that software to do the same. If those developers had been in the position of these users when they wanted to develop the software that they are happy to see tivoized, they would not have been able to. I'm very glad that GPLv3 tackles tivoization.

Tivoization can lock you out of access to cultural work and personal memorabilia that you own or have created. Its legal or technological form is unimportant when considering its practical effects. This is true of DRM as well. Those within the free culture movement can and should tackle these issues alongside those within the free software movement.

Matt: You've written a few pieces of free software for artists--most of these are now released under version 3 of the GPL. What's the hold up on Minara?

Rob: I regard software freedom as a principle to be protected rather than as the product of a particular license. GPLv3 seems to be an effective and proportionate response to challenges to that principle that have emerged over the last decade or so. Arguing that tivoization or DRM are not or should not be part of the GPL's remit does not make sense: they are threats to the freedom of software that didn't exist a decade ago in much the same way that the threats to older versions of the GPL tackled didn't exist forty years ago.

Minara (Minara Is Not A Recursive Algorithm) is a programmable graphics program editor. A kind of Emacs for vector graphics. The program, its tools, and the images it edits are all written in user-editable Scheme. I used some Scheme code from a third party that seems to be GPLv2 only and I need to find the author of that code to relicense it. The moral of this is that people need to make it clear that their code is licensed GPL version x or later.

Matt: On the subject of the Amazon's Kindle eBook Reader, Mark Pilgrim pointed out that "The Right To Read" was supposed to be a warning, not a design document--what would be your message to authors unaware of the dangers of DRM books?

Rob: Don't mistake a protection racket for job security. Find out what authors like Cory Doctorow have to say about the negative effects that DRM has on your relationship with your readers and customers, and, look at their examples of turning unauthorized copying into free promotion. Using copyleft and network effects to drive sales is a strategy that works, Hasbro adopted it for their relaunch of the Dungeons & Dragons game books a few years back.

And don't forget that DRM-free music still sells well and is now being called for by music retailers as well as fans.

Matt: Finally, as web applications become increasingly common, what dangers do you see ahead, as the possibility of hosted graphics and design software becomes ever closer? Do you think the newly released GNU Affero GPL will help?

Rob: Software as service may be the next great threat to software freedom. It is tivoization for the web. Web 2.0 may just be Google's aftermarket--"economic heat noise" as Eben Moglen accurately described it. But the trend to utility computing and The Cloud means that not just executable software but data will be locked away outside of users' control.

As an artist or author, I wouldn't want to use hosted software or store my work primarily on a hosted service. If there is an earthquake or an economic slump near my data center, I don't want to lose my work.

AGPL will help with access to software, but not with access to data or cultural work, at least not directly. Common formats, web services, and user rights charters are needed as much as access to code--which you will need to pay for access to The Cloud to run anyway. Free culture can help both to make the case for this environment and to provide and protect content for participants in it.