Last week, on October 11th, RMS received an honorary doctorate from the Université Pierre et Marie Curie, in Paris, France. In anticipation of the merger between the UPMC and the Université Paris-Sorbonne, which will be finalized in January 2018, the two institutions organized, in the great amphitheater of the Sorbonne, a joint ceremony that recognized both achievers in the sciences and in medicine, as well as ones in the arts and the humanities. The UPMC stated, “This joint ceremony was the occasion to welcome with pride into two communities, soon to be joined as one, these men and women of remarkable achievement who are committed to the service of the common good.” Six women and eight men1 were honored, “each one for the essential role they play in their discipline.”

Dr. Alice P. Gast, president of Imperial College London, in her speech to represent the eight doctors in medicine and in the sciences,2 stated that she and her fellow honorees were “proud to be joining the group of 130 eminent scientists who have received this recognition since 1975.” “We have all had different starting points,” she continued, “and very different paths. But our carriers and our love of science have one thing in common: the ardent will to contribute to the progress of society.”

Some of the honorees, including RMS, along with their respective hosts.
(Photo under CC BY-SA 3.0 and courtesy of Lionel Allorge.) The UPMC's Dr. Nathalie Drach-Temam introducing RMS.
(Photos under CC BY-SA 3.0 and courtesy of Laurent Ardhuin for the UPMC.) UPMC president Jean Chambaz, in red, awards RMS the diploma and the medal, while Paris-Sorbonne University president Barthélémy Jobert, in yellow, drapes the three-banded, doctoral epitoge over RMS's left shoulder.
(Photos under CC BY-SA 3.0 and courtesy of Laurent Ardhuin for the UPMC.) The honorees and their hosts and representatives from the two universities. Those in the burgundy-colored university robes are from the sciences; those in the red, from medicine; those in the yellow, from the humanities.
(Photo under CC BY-SA 3.0 and courtesy of Laurent Ardhuin for the UPMC.) RMS enjoying a snack and socializing at the post-ceremony reception.
(Photos under CC BY-SA 3.0 and courtesy of Lionel Allorge.)

Later that day, RMS was on the UPMC's Jussieu campus to deliver his speech “What Makes Digital Inclusion Good or Bad?”3 to an audience of about four to five hundred people.

Please fill out our contact form, so that we can inform you about future events in and around Paris. Please see www.fsf.org/events for a full list of all of RMS's confirmed engagements, and contact rms-assist@gnu.org if you'd like him to come speak.

Thank you to the UPMC for having recognized RMS in this way!

1. You can find a list of all the honorees here.↩
2. Read Alice P. Gast's full speech here (in French).↩
3. A recording of RMS's speech will soon be available both here and in our audio-video archive.↩ 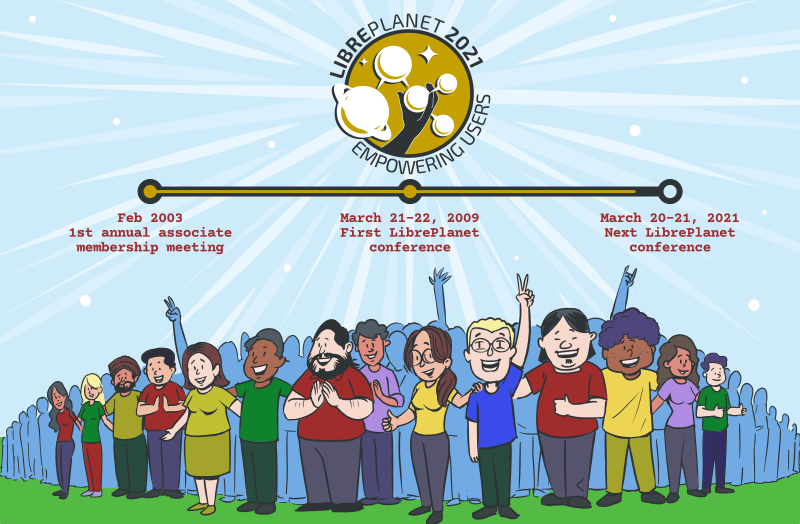