You are here: Home › Blogs › Membership › Ithaca Inspiration and DRM

At last year's Associate Members meeting we were all inspired by the outreach work undertaken by the free software group in Ithaca, NY. (http://ithacafreesoftware.org/)

At this year's meeting, held at the Massachusetts Institute of Technology on Saturday April 1, we launched a Members Forum, enjoying a session at the end of the day entitled "moving free software into the mainstream" led by FSF board member Henri Poole.

The aim of the Members Forum was to draw upon the inspiration provided by the Ithaca group and identify all the ways in which the Foundation and its members can effectively campaign for free software and build a stronger community. During the meeting we broke into geographical groups, and were pleased to help introduce members to one another. The results of that session were recorded in a new wiki, and that wiki is now open to the community and we encourage you to add new pages for your state, country, region and get connected to other members, and free software activists. You can form your free software group now (http://groups.fsf.org/) and listen to this session as well as the other recordings made at the members meeting.

The FSF Sysadmin team ran through the technical resources provided to the community, and Justin Baugh gave us some interesting statistics. For instance, the GNU and FSF mailing lists have over 50,000 unique subscribers participating in more than 2,100 mailing lists. More than 1/2 million tarballs and 22,000 ISO images are downloaded every month from ftp.gnu.org and the Free Software Directory receives 2.25 million page views per month http://directory.fsf.org/. Ward Vandewege gave a progress report on our Free BIOS campaign and upgrading FSF servers to run coreboot.

FSF Program Administrator John Sullivan updated the members on FSF campaigns and reflected on the Open Document battle in Massachusetts. He also ran through the new resources provided at http://www.fsf.org/resources

I gave a short outline of some of the ongoing efforts being made to get more mainstream press coverage, looking at ways to frame Free Software as an issue for civil society.

After a short coffee break, FSF Board member Geoffrey Knauth delivered a speech entitled "The economic impact of increasing use of free software in society", explaining the trends we are seeing in free software use.

After lunch FSF Board member and MIT professor Gerry Sussman delivered a speech entitled "software is never finished", based upon his current lectures series at MIT. I personally found the examples he gave, of his students work on replicating mathematical models found in nature, to be particularly fascinating.

FSF Board member and legal counsel Eben Moglen's speech "The Hardware Wars and the future of free software", was a classic in every way. What can I say? You must listen to this. This speech touched on so many important issues that face the free software movement, that you will feel deeply enlightened having listened.

I think Richard set a speed record in his delivery of a comprehensive speech on the threats posed by Digital Restrictions Management DRM), and followed by taking a number of questions from members.

Members were now well primed to discuss their ideas in the Members Forum. And one major theme was apparent from this years meeting, and from discussions at the FSF board meeting held the following day -  It's time to launch a broad based campaign against DRM.


A Campaign against DRM

The anti-DRM provisions in the draft release of GPLv3 represent the line in the sand that the free software movement has drawn and said will not be crossed with respect to its covered work. But DRM threatens the freedom of all computer users, and allowing it to gain a stranglehold in our homes is unacceptable.

Work covered by GPLv2 only is a target for Tivoization, and that puts all free software developers' freedoms at risk. Freedom 1*, the freedom to tinker, will quickly be eroded in world where devices will not run modified code. We can hope that people will not buy such devices, and that there will be a market left to cater to our needs. But what if there isn't?

DRM is also an apparatus for surveillance in our homes. Media interests don't just want to prevent copying of their works, they want to extend their reach into all our activities. They want to turn ever interaction you might have with a copyrighted work into a transaction, and to do that, they need the keys to your home so that they can monitor you. DRM is their first entry point, and the framework upon which surveillance is being legitimized.

Device manufacturers are in a dilemma. They are threatened by Hollywood, which says that you must incorporate DRM if you want to be able to play Hollywood movies. If one manufacturer doesn't take the bait, then another might, and they will be locked out.  When you combine Hollywood and the other large media interests, their business is but a fraction of the size of that of device manufacturers, and yet manufacturers kowtow to these threats. Why? The MPAA and the RIAA are well connected to US legislatures, and are of course, in the business of creative works and illusion. They punch above their weight.

GPLv3 is the line in the sand against DRM. We could just defend our position, but what we really need to do, is cross this line and challenge DRM:

- Don't give Big Media the keys to our homes.

- Help the device manufacturers understand that their real interests lie with their customers not Hollywood.


Organize with other free software activists, or start a free software group in your area.  Please visit the new wiki at http://groups.fsf.org/ 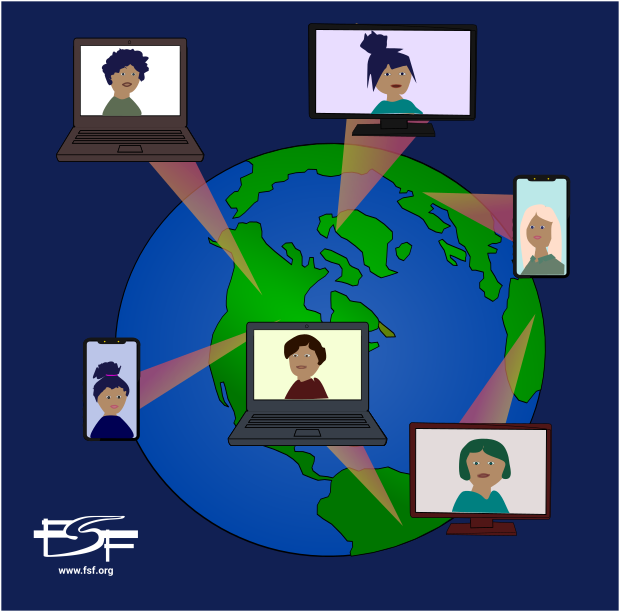