You are here: Home › Blogs › From the FSF's Executive Director › Join with me to support the Software Freedom Conservancy

Join with me to support the Software Freedom Conservancy

by John Sullivan Contributions — Published on Dec 21, 2015 12:54 PM
This is a key moment to stand up for yourselves, to give back for work that's already been done, and to ensure the continued growth of free software as a means to ensure our freedom, and the freedom of future generations. Fortunately, since we have the strength of numbers to draw on, you can do your part for both organizations for less than the monthly cost of a couple Netflix subscriptions or a single dinner out. 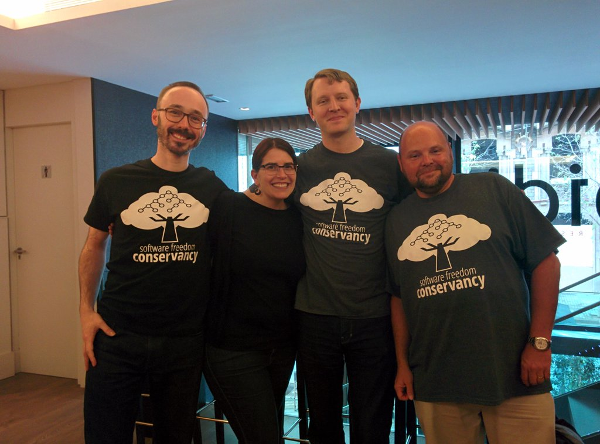 Last year, I joined the Software Freedom Conservancy as one of their first Supporters, doing my small part to bolster their then-new grassroots fundraising program. Today, after reading up on the fantastic results they've achieved over the last year, I'm renewing my support. I hope you will join me this giving season in supporting both the FSF and Conservancy.

Bradley Kuhn, Conservancy's President, hired me to work at the Free Software Foundation in March of 2003, when he was the FSF's executive director. Bradley had just, at the end of 2002, led the effort to design and launch our associate membership program. He did this to get the FSF, which was faltering, back on stable financial footing. Thirteen years later, you can see the success of his efforts. The FSF has not only remained solid -- we've even grown. By donating to Conservancy now, you can help them reach the same level of stability.

Every day, I am thankful for the work Bradley did in 2002 and the result that the FSF is almost 85% funded by individuals. While we receive and welcome support from corporations as well, the fact that we do so from a position of grassroots strength and independence helps us stick resolutely to our principles and the clear-eyed pursuit of our charitable mission to make all software respect the freedom of the people using it.

The best way in our current legal regime to make this dream a reality is to distribute software under the terms of a copyleft license like the GNU General Public License (GPL). The GNU GPL guarantees that software initially distributed under its terms will always be free for anyone to run, share, modify, and re-share. Software bearing its shield can never be incorporated into proprietary, restricted products like those distributed by Microsoft, Apple, Google, and -- sadly -- many others.

This protection, though, is not automatic. The terms of the GPL need to be actively enforced whenever companies attempt to take works written and distributed by developers committed to respecting users, and instead use those works as the basis for restriction and control. Such companies are doing something unethical. They are taking software deliberately committed to the commons for everyone to build on in their own endeavors, whether commercial or noncommercial, and instead using that work to try and get a cheater's advantage over their business competitors.

The GPL is more than capable of stopping this cheating. But someone has to detect it, and someone has to take action to stop it. We describe this work as "GPL enforcement" or "GPL compliance." The software copyright holders or their designated representative are the ones who have the legal standing to tell the cheaters that they have to stop cheating, and to take them to court if they refuse. The FSF, standing up for the developers of GNU software, and as a proxy for users everywhere, does this work daily. So does Conservancy, on behalf of its member projects and other developers they have specific agreements with. These projects include a few you might have heard of, like Git, Samba, Mercurial, and the GPL Compliance Project for Linux Developers.

Even though we have decades of evidence that following the terms of the GPL can lead to enormous business success, some bad actors still cheat and take shortcuts. They build their products using the ladder handed to them by free software developers, and then try to kick it away so no one else can do the same.

Organizations like the FSF and Conservancy, working with like-minded free software developers, take on the often David vs. Goliath work of investigating and stopping such cheating. Because this work involves using the power of problematic legal systems, we both follow a set of principles designed to make sure we do it for only the right reasons and never for mere financial gain.

Fortunately, the problem of deliberate cheating is less common than companies who distribute both GPL and non-GPL software unintentionally screwing up. Even though GPL-licensed software is now the backbone of our international economy, distributing it is still new to many companies. Conservancy and the FSF help such companies find and correct their mistakes and start to do things the right way. We do ask to be reimbursed for our time on such work, but at very modest rates that by themselves never seem sufficient to expand it -- largely because both organizations also devote much of our time to helping free software developers use licenses properly, at no charge.

While, as the FSF's executive director, I am primarily concerned about growing our own work in this area, it is also abundantly clear that we need more than one organization doing it. If we don't, all the amazing work done over the last two-and-a-half decades developing and sharing software under the GPL will end up having been in service of making cheaper and easier ways to restrict and control people, instead of building the digital foundation for a truly free society. As Conservancy's executive director and unflappable advocate of user freedom Karen Sandler said in her 2015 LibrePlanet keynote, someone needs to "stand up for the GPL."

The GPL works. It has been tested in courts. It has established and maintained strong norms outside of court. But like the Millennium Falcon's deflector shields, if you don't keep it charged and angled at the threats, you'll be vulnerable.

Unfortunately, some companies see the very success of free software as evidence that we should stop doing GPL enforcement and stop worrying about whether they are actually passing along the freedoms the GPL gave them. This is short-term thinking on their part, undermining the very principles and dynamics that made their businesses possible.

They are testing the waters to see how much you, as an individual, care about having your freedom respected. There are many ways each of us can stand up for our own freedom, but in practice, as each of us have day jobs, families, and complex lives, the best option we have is to join our resources with others', and support groups whose day job is to work on our behalf.

To that end, Bradley Kuhn and Karen Sandler are two of the hardest working people I know. For them, it's much more than a day job. Together with their General Counsel Tony Sebro, their License Compliance Engineer Denver Gingerich, and their all-star board of directors, they get an astounding amount of work done, for astoundingly modest compensation. They do it for all the right reasons, and are incorruptible. As someone who has worked closely with 13 years' of FSF staffers and board members, and hundreds of free software developers and activists, my expectations in this area are very high. These are exactly the kind of people you want working on your behalf.

What they get done -- behind the scenes doing critical administrative work so developers can focus on development; out on the international speaking circuit inspiring people and focusing attention on key issues facing our movement; and on the phone successfully navigating delicate, difficult negotiations -- is a constant inspiration to me and should make you, as a Supporter, feel very good about how your donations are used.

This is a key moment to stand up for yourselves, to give back for work that's already been done, and to ensure the continued growth of free software as a means to ensure our freedom, and the freedom of future generations. Fortunately, since we have the strength of numbers to draw on, you can do your part for both organizations for less than the monthly cost of a couple Netflix subscriptions or a single dinner out. And if you do it now for Conservancy, your donation will be matched.

The alternative -- of being surrounded by computers of all shapes and sizes controlled by others for the purpose of influencing, monitoring, and restricting every aspect of our lives, will be far more costly.