by Stephen Mahood Contributions — Published on Mar 20, 2016 02:19 PM
We are into the second day, but I wanted to take the time to share some thoughts on day zero. The initial keynote was delayed a little bit because of some unforseen network issues, which required Massachusetts Institute of Technology (MIT) to restart part of their network. So many folks were held in anticipation of the opening keynote after the tech issues were resolved things kicked off. After executive director John Sullivan began with a 'yuuuuuge' introduction the anticipation was met immediatelywith Daniel Kahn Gillmor introducing Edward Snowden! 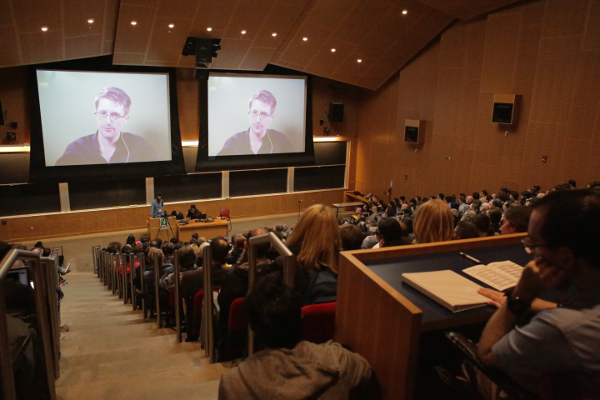 Before Daniel could even finish introducing Edward, the room broke out into clapping and a standing ovation. Edward responded with clear emotion by thanking the community for creating free software. 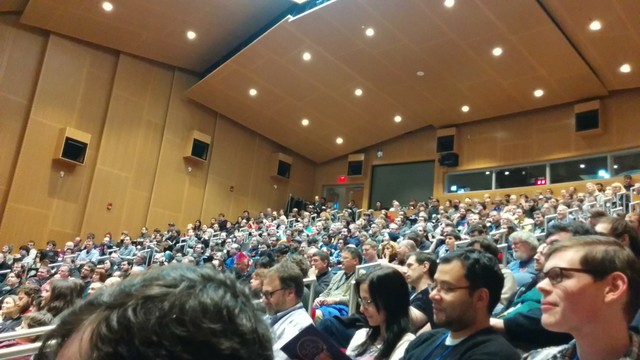 The feelings of energy, emotion, and celebration were vibrant in the room. Naturally, things ran over time, and those watching the stream had sound-related issues, so Ruben (our newest tech team member) made a valiant effort to edit and publish the video.

With the late start to the keynote, the following sessions were pushed back a bit, but amid the typical conference chaos, things came together quite nicely.

I had a chance to step into the session on "Inessential weirdnesses in free software," by Sumana Harihareswara. She made some very interesting points about social inclusion and acceptance of new folks into the community. Her attention was on the importance of communities that are not represented well or at all. She gave advice on ways to create a more inclusive community and appealed to the personal challenges that we face.

Afterward, I stepped into another session on the "Experiences around FLOSS tools and social movements in Mexico," which was presented in Spanish. We had a member, Emily of the Boston Interpreters Collective, provide interpretation for the audience. The material was very deep and interesting, developing the context for how their human rights organization in Mexico chose a way toward free software. A part that touched me was the discussion on adapting the adoption process to those in the organization, in that people are not pushed, but engaged in a longer progressive process working towards free software everywhere. It was a challenging session to interpret, and we deeply thank Emily for her interpretation work.

Following the intriguing session on social movements and free software, the next one that brought a lot of attention was the LittleSis session, which packed the room. LittleSis is a platform for power mapping research with an accompanying mapping tool, aptly named "oligrapher." Many folks in the room appeared to be deeply interested in mapping out the power structures of various movements. The room was full of genuine support and analysis, with great feedback. The interest grew as the session progressed. They presented some examples on ways the data has influenced change. One example was the merger of Comcast and NBC. While LittleSis research presented some amazing findings, it was a rather comical satire at times on the data presented. I really encourage people to watch the video, when we put it up.

The day concluded for me with the Free Software Awards, where Library Freedom Project and Werner Koch were celebrated for their contributions to society.