You are here: Home › Blogs › Community › GNU MediaGoblin offers what you've been missing in an Internet media-sharing system

by Zak Rogoff Contributions — Published on Oct 11, 2012 06:10 PM
Today the Free Software Foundation is proud and excited to assist the GNU MediaGoblin project in its fundraising effort. MediaGoblin's volunteer team is working on a next-generation social web system where users will share their experiences through photos, videos and audio, all without running proprietary software. This project is ambitious, not just because it will support multiple media types, but also because it will use a special new network system called federation, which unifies a group of separately-owned servers into a single interface for the user. This means that anyone wishing to start a MediaGoblin server will be able to do so, optionally customizing the code to their needs and offering unique options to users. 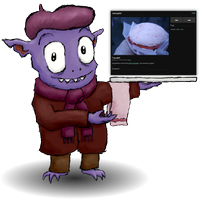 Go here to donate to MediaGoblin.

Federation will also help MediaGoblin respects users' freedom and privacy in ways that traditional media-sharing Web sites generally do not. By removing data from a central source and allowing anyone to create their own instance of the system, federation encourages transparency and inclusion. This commitment to respecting its users comes at a time when online communications are increasingly threatened by intervention and censorship from governments and corporations, often with the help of the communications companies themselves. The MediaGoblin team and FSF have faith that the trust they build with users will draw people away from places like Facebook, Flickr and YouTube, as well as make MediaGoblin a hit in the free software community.

About MediaGoblin, and why they need our help

The MediaGoblin team is made up of about fifty part-time volunteers, led by project founder Chris Webber. They've made surprising progress in the year-and-a-half since the project's founding, but they need donors' help to perfect the system. If they reach their goal of $60,000, they plan to use the money to support a full-time project lead to organize volunteers and polish the project to a professional level. With this support and more hard work, Chris estimates that MediaGoblin will be usable within a year. MediaGoblin is offering donors goblin-themed items designed and made by Chris himself. Help out enough, and he'll even cook you a wholesome dinner at his home in Madison, WI.

To pitch in, go to http://mediagoblin.org/pages/campaign.html. Don't forget to pick a reward!

A new kind of media-sharing system

MediaGoblin's distributed system is called a federation because it will spread users' media across multiple servers, all running the free MediaGoblin software and communicating with each other. As compared to a system like Facebook, which is based in one set of servers controlled by a corporation, this system lets anyone set up a MediaGoblin server and hook into the network, making it very difficult for others to shut down all of MediaGoblin at once. In fact, StatusNet, a free software Twitter replacement with a similar federated system, has become popular in countries like Iran, where the state blocks Twitter to quash dissent. And the benefits of federation come at no cost to ease of use -- the programmers at MediaGoblin have designed the system to take information from multiple servers and combine it into one convenient interface for the user, making it just as easy to use as a traditional centralized media-sharing system.

We're developing GNU MediaGoblin because we believe user freedom is important, especially in the Web. More and more users are becoming trapped by proprietary, centralized media publishing systems where problems like automated censorship are becoming serious. We believe in the vision of the decentralized Web as a mechanism to empower people, and we want to bring that Web back! We're proud to be teaming up the Free Software Foundation in the fight to put power back into the hands of users. We've done a lot of good already, but we need your help to make this federated future a reality! --Chris Webber, MediaGoblin founder

As a GNU project, MediaGoblin gets support, publicity and advice from the FSF. Many famous programs have developed with similar assistance from the FSF, including the software behind the GNU/Linux family of operating systems and the GCC C compiler. Recently, the FSF has started accepting donations directed toward particular free software problem areas in need of development at https://my.fsf.org/donate/directed-donations/working-together. The FSF intends to offer this service and hosting for MediaGoblin-style fundraisers to more GNU projects in the future. FSF executive director John Sullivan has high hopes for MediaGoblin:

We're excited about the GNU MediaGoblin project, and we're thrilled to be providing its grassroots fundraising infrastructure. Without a doubt, we need a decentralized, free software system for sharing our photos and videos. We need a system that doesn't require using nonfree software or handing our memories and artwork over to a single point of privacy-violating, proprietary ownership-claiming failure. MediaGoblin can be that system, and its future users can make it so. I look forward to the result -- and to the example this could set for funding other critical free software projects. --John Sullivan, executive director of the Free Software Foundation

Almost thirty years ago, the free software movement was founded to make it possible to use a computer without compromising basic freedoms. Projects like MediaGoblin and StatusNet are part of the next phase of that effort, working to return to an Internet that respects and empowers people. The FSF believes that this new old Internet is needed now more than ever, as government intervention and corporate control is reaching a new peak. We can get to this vision of a free Internet faster by finding a way to fund these projects, which is why MediaGoblin needs your help. To donate to MediaGoblin (and claim some awesome rewards), go tohttp://mediagoblin.org/pages/campaign.html. Thank you.

You can check out MediaGoblin's blog post about the fundraiser here: http://mediagoblin.org/news/crowdfunding-campaign-launches.

For a formal press release from the FSF, see http://www.fsf.org/news/fsf-rallies-support-for-gnu-mediagoblin-to-make-media-publishing-free-as-in-freedom.