You are here: Home › Blogs › Community › At SeaGL 2019, free software was in fine feather

At SeaGL 2019, free software was in fine feather 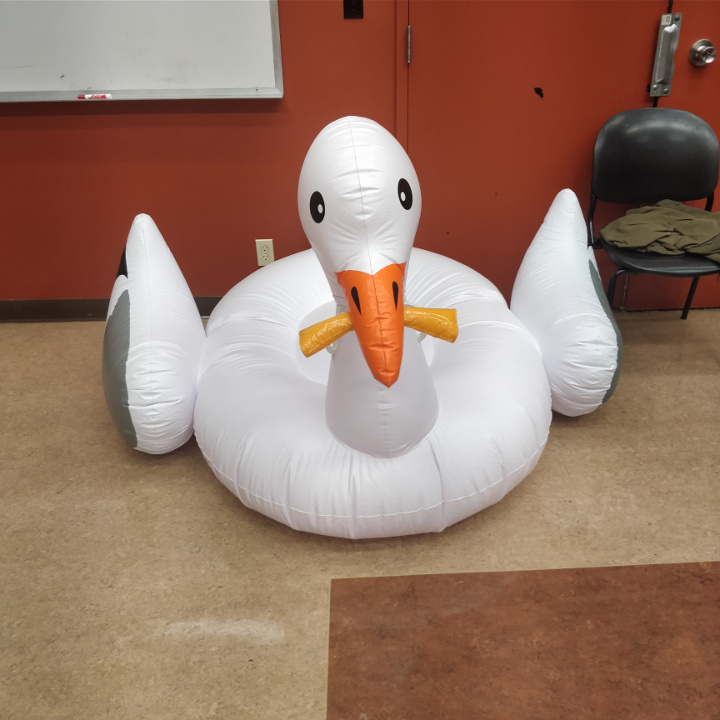 While the satisfactions of software freedom are quite enjoyable on your own, some of the greatest joys of free software come from our opportunities to flock together with other members of our community: to collaborate on our work, teach new skills, or simply show off new achievements. A grassroots gathering like the Seattle GNU/Linux Conference (SeaGL) is fun because it’s so thoroughly participatory: everyone comes into the room with something they’re excited to tell you about, and they’re equally excited to hear what you’re working on. The people at the front of the room giving a keynote talk are just as likely to be sitting next to you in the next session, so you can tell them what you thought of their talk, and even find out how to participate in their projects!

As someone who is fairly new to the free software world and comparatively short on tech knowledge, I mostly attended talks on free software culture and more easily understood technological talks, although these were hardly the only topics on offer. Having unfortunately missed the opening keynotes by Lisha Sterling and Abigail Cabunoc Mayes due to some bad allergies, I began the day with a talk on DIY decentralization, by Aeva Black. Black set an irreverent tone for their talk with a reference to the notoriously goofy nineties movie Hackers, but quickly veered into much more serious territory: major digital communication platforms have exercised bias and even overt censorship against marginalized groups. How do we navigate around the power of Facebook, Twitter, Google, and the rest? Decentralization, federation, and self-hosting provide some good solutions, and a quick demonstration showed that if you have some basic know-how and tools, anyone can do it.

Next, I checked out Audrey Eschright’s talk called “Organizing your way to a long and healthy career.” Jumping off from the recent walkouts at companies including Facebook and Wayfair, as well as her own experiences trying to correct issues in past workplaces, Eschright laid out some of the basics of workplace organizing without a union. If nothing else, some of these strategies can be crucial for your sanity: as Eschright pointed out, just knowing “I’m not alone in what I want” can be a great relief.

My next talk was “Empowering new programmers through introductory Arduino workshops,” presented by Hailee Kennedy, a developer and co-organizer of the Django Girls PDX program, of Portland, Oregon. Kennedy has put a lot of time and thought into the best ways to introduce women and girls to programming in order to help diversify the computing world, and she spent a lot of the talk comparing various workshops she’s given in order to highlight best practices. The most important take-home message I got from this talk (and have continued to repeat to everyone since): actually learning a new skill takes practice, so nobody’s going to learn a skill they can immediately reuse from a one-day workshop. The goal of these courses, instead, is to pique the curiosity and confidence of the attendees – to give them an experience they’ll enjoy so that they’re eager to take on more programming projects on their own! So, an onerous experience that focuses on training and rote learning isn’t going to do the trick: instead, participants need a social, fun, and satisfying experience that they come out of having created something concrete, creating an itch to try more programming.

My final talk of the day was “Make it official: In praise of official programs for diversity and inclusion,” presented by 2018 Free Software Award winner Deb Nicholson. In this talk, Deb noted that a lot of the previous practices attempted by many companies to bump up diversity have failed simply because people don’t like them: trainings, for instance, can feel like a punishment. On the other hand, participants on both sides of mentoring programs like Outreachy absolutely love how these paid internships work – and they really do help interns get the tech jobs they’re aiming for! The FSF has hosted internships for several Outreachy participants so far, and I'm glad to hear that in our small way, we're helping to open doors.

I spent the rest of Friday at the FSF table in the exhibit hall, chatting with visitors and selling GNU Press gear, and then running our meetup at Herb & Bitter Public House, a few blocks away from the venue -- they completely merit the shout-out here, since they took wonderful care of us, and all of our guests seemed quite satisfied! We organize these informal meetups at most free software conferences that have staff attendees, to provide our supporters with opportunities to mingle, cross-pollinate their projects, and tell us how they feel about our current efforts. After all, our members and other supporters enable the FSF to exist, so we need to be available and accountable to you!

Day two of the conference started with keynotes by Benjamin Mako Hill (“How markets coopted free software’s most powerful weapon”) and Sage Sharp (“Countering impostor syndrome culture”). Mako’s talk began with data tracking the popularity of the Couchsurfing Web site versus Airbnb, and laid out a somewhat grim forecast for the future of free software: proprietary software companies borrowing techniques from commons-based peer production projects like free software are replacing, displacing, and outcompeting what's available in the commons. Mako delivered a similar talk at LibrePlanet 2018, which you can view on our MediaGoblin instance.

Sage Sharp’s keynote was particularly useful for me, as someone with limited technical know-how at a tech conference: their goal was to educate us all on how to avoid worsening everyone else’s impostor syndrome, since it’s likely that we’ve all got at least a little bit! My favorite take-home message from this talk: telling someone that their project, or their talk, or their artwork is “very good and you’re very talented” has a way of exacerbating people’s insecurities. You can avoid making them feel this way, however, by telling them, instead, how their work made you feel: as Sharp put it, “I can’t argue with your feelings.” Thus, when Sharp sat down next to me at the end of their talk, I told them, “I’m now going to use a skill you’ve just taught me: your talk made me feel very seen.”

My last stopoff before a long stint behind the FSF table was at Eva Monsen’s talk on “Learning natural language processing through the Regender Project.” This was one of those rare talks that had everyone in the room buzzing with excitement: the Regender Project is an open-ended experiment wherein Monsen is attempting to reverse (or neutralize) all gendered language in books that are available in the public domain, entirely through machine learning. You’d think this would be simple – just program your computer to change “he” to “she,” right? But at each stage of the project, Monsen found that she had to add more steps, and discovered more roadblocks, which she laid out as a fascinating narrative about how thoroughly gender is built into the English language (and, of course, many others). By the Q&A session at the end, hands were flying into the air with suggestions for other steps to try, and insights about gendered language, demonstrating the participatory and creative potential built into the world of free software, and how it opens so many possibilities to explore and reach a new understanding of personal and political realities.

After a few more hours selling T-shirts and talking free software at our table, I finished off the day with a talk that I knew would be too amusing to miss: “The Death Star Postmortem,” delivered by Gareth J. Greenaway. Every complicated project needs a postmortem, whether your project is a smashing success or a ludicrous failure like the fictional Death Star, which was destroyed not once but twice. Mostly maintaining a pretty impressive deadpan throughout, Greenaway started by explaining best practices for a postmortem on any project, with emphasis on how a properly done postmortem avoids placing blame, maintains team cohesion, and helps to avoid making the same errors twice. He then went into how Darth Vader, the Emperor, and the Galactic Empire proceeded to… make the same errors twice, and some new ones, besides. It was a very informative and entertaining finish to an excellent conference.

The FSF presence at SeaGL couldn't possible have done without the time, skills, generosity, and patience of our local volunteers, who did a masterful job setting up, running, and breaking down our table, selling GNU gear, and answering all the questions I couldn’t. I cannot possibly offer enough gratitude to Pean Lim, McCoy Smith, Jeff Silverman, and Mike (whose last name I didn't catch), all of whom were completely indispensable and deserve your applause. Along with countless other organizers, presenters, and free software supporters, they demonstrated to me that the power of our movement lies in our collective commitment to the cause, and our constant willingness to welcome and bring new people into the fold so that we can keep growing stronger every day. If everyone reading this is half as good as they were at making a relative newbie feel welcome, nothing can stop us in our mission to make all software free!

Finally: whether you live in the great Northwest or not, and whether you're inclined to attend grassroots free software conferences or not, you can help SeaGL keep soaring by donating to the FSF. SeaGL is one of the projects that's fiscally sponsored through our Working Together for Free Software Fund, so you can also contribute directly through their fiscal sponsorship page!