Lady Ada King, Countess of Lovelace, was a 19th-century English mathematician who many consider the first programmer, because she published the most complete and in-depth description of the Analytical Engine, an early computer conceived of by Charles Babbage. At the time, Babbage was only able to build parts of the Analytical Engine, though the Science Museum of London completed construction of Babbage's later design, the Difference Engine No. 2, in 1991 for the 200th anniversary of Babbage's birth. This year, to honor Ada Lovelace's legacy, we want to tell you more about Marina Zhurakhinskaya and Outreachy. 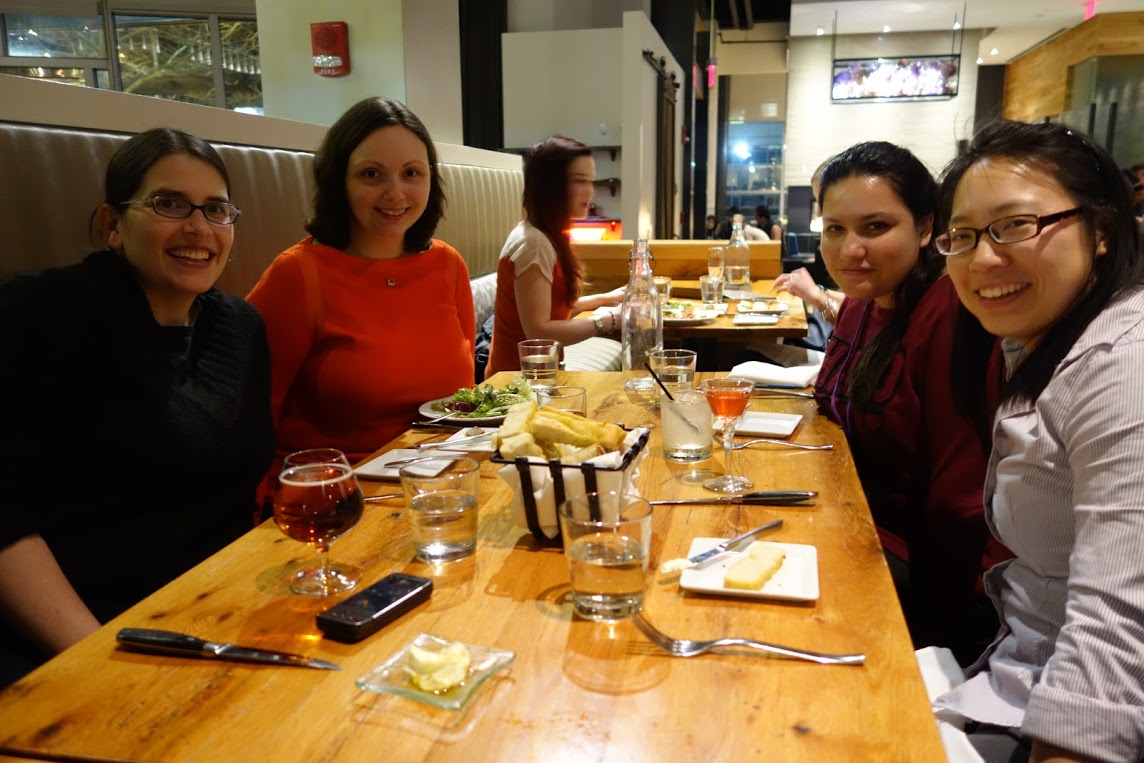 Marina is an engineer -- she has worked at Red Hat for nearly a decade, and her work currently focuses on community diversity and inclusion. She also works with Outreachy, an internship program that aims to bring underrepresented groups into the free software community, which received the Free Software Foundation's Award for Free Software Projects of Social Benefit in 2014, under its previous name, the Outreach Program for Women.

Outreachy offers mentored, remote internships in free software. Participating projects include GNOME, Wikimedia, and Mozilla. Since 2010, the program has had nearly 250 participants, many of whom have moved on to jobs in tech, conference presentations, and giving back to the program by becoming mentors. We conducted an email interview with Marina to tell us a bit more.

Talk about your new role as senior outreach specialist of community diversity and inclusion at Red Hat. How did your own experience in the tech industry influence your career track at Red Hat? And how did you become involved with Outreachy (formerly the Outreach Program for Women)?

Working as a senior software engineer at Red Hat on the GNOME Project, I was very impressed by the talent of the project contributors, by how rewarding it is to work on free software, and by the feeling of connectedness one gets when collaborating with people all over the world. Yet, at GUADEC 2009, of approximately 170 attendees, I believe I was one of only eight women. Of the software developers working on the entire GNOME project at the time, I was one of only three.

Shortly after that GUADEC, the GNOME Foundation board of directors asked if I would be willing to lead an outreach effort for GNOME aimed at bringing women into the community and mentoring participants. I also got an invitation to participate in the Free Software Foundation's Women's Caucus and later attended the Women in Free Software track at LibrePlanet 2010. These events allowed me to learn about the efforts that already had taken place in free software to increase participation by women and allowed me to make connections with other people passionate about this topic. I created the Outreach Program for Women with the help and support of Stormy Peters – then GNOME Foundation executive director. Later, the next GNOME Foundation executive director, Karen Sandler, helped expand the program beyond GNOME to include many free software communities.

As the Outreach Program for Women grew, I switched to a role of community engagement lead at Red Hat, combining GNOME community management and coordination of the program. At the same time, I was gaining more experience in diversity by following the resources created by the Ada Initiative and others who wrote about diversity issues, attending AdaCamps, and later joining the board of advisors and board of directors for the Ada Initiative. In 2015, as coordinators of Outreach Program for Women, Karen Sandler and I have led the work to rename it to Outreachy, move it to Software Freedom Conservancy as its new organizational home, and, with the help of four new coordinators, expand it to be open to people of color underrepresented in tech in the U.S., while continuing to be open to cis and trans women, trans men, and genderqueer people worldwide.

The vast potential to empower more people from diverse backgrounds through participation in free software and to make our community stronger with more contributors motivated me to seek a full-time position focused on free software community diversity and inclusion. My senior outreach specialist role at Red Hat involves co-organizing Outreachy and providing support for Red Hatters who are looking to make their communities and teams more diverse and inclusive. At the core of this role is a recognition that while we need participation from all engineers as mentors and allies for diversity efforts, we should not primarily rely on minority engineers to take on the work of organizing these efforts or developing expertise on the issue, as this is an excessive burden. A major component of the role is organizing structured and meaningful opportunities to be mentors for all engineers, that draw on people's specialized skills, help them grow professionally, and only require a manageable time commitment from them.

Outreachy alums and mentors at GNU 30th celebration in September 2013.

How has winning a Free Software Award for Projects of Social Benefit in 2014 impacted Outreachy?

Winning a Free Software Award for Projects of Social Benefit was a very proud moment for Outreachy. It showed that the free software community valued and supported the effort to bring in more people from diverse backgrounds. It shone a light on the program and increased its recognition. Since then, such important communities as the Humanitarian OpenStreetMap Team and X.Org have joined Outreachy.

I am also thankful to the Free Software Foundation for being a long-time sponsor of Outreachy.

Outreachy's scope has continued to expand: what's the latest?

The diversity data for the U.S. released by many tech companies shows that many of them only have 1-3% Black and 2-4% Hispanic employees in technical roles. The population of the U.S. is 13% Black and 17% Hispanic. We don't have any data like this for free software participation, but we can tell there is a lack of racial and ethnic diversity at conferences we attend.

For the upcoming December round, the program has expanded to be open to residents and nationals of the U.S. of any gender who are Black/African American, Hispanic/Latina, American Indian, Alaska Native, Native Hawaiian, or Pacific Islander. It continues to be open to cis and trans women, trans men, and genderqueer people worldwide.

Cindy Pallares, Tony Sebro, and Bryan Smith joined Karen Sandler, Sarah Sharp, and me as Outreachy coordinators. With their experience as African American and Latina free software professionals and with the disparity shown by the diversity data, we knew that the targeted expansion to people of color underrepresented in U.S. tech was an appropriate next step for Outreachy. We know there are many other groups of people and parts of the world underrepresented in free software. While we expect it to take several rounds for us to manage the growth that will come with this expansion, we welcome input on what populations we should consider reaching out to next.

People in free software work really hard to make their projects successful and recognizing them for their work shows the appreciation we have for it. Nominating a person or a project for a Free Software Award can help bring more attention to their mission and share with the world an inspiring free software success story. Finally, the recipients will enjoy attending LibrePlanet – a fantastic conference – and receiving their award from Richard Stallman as hundreds of free software enthusiasts cheer. 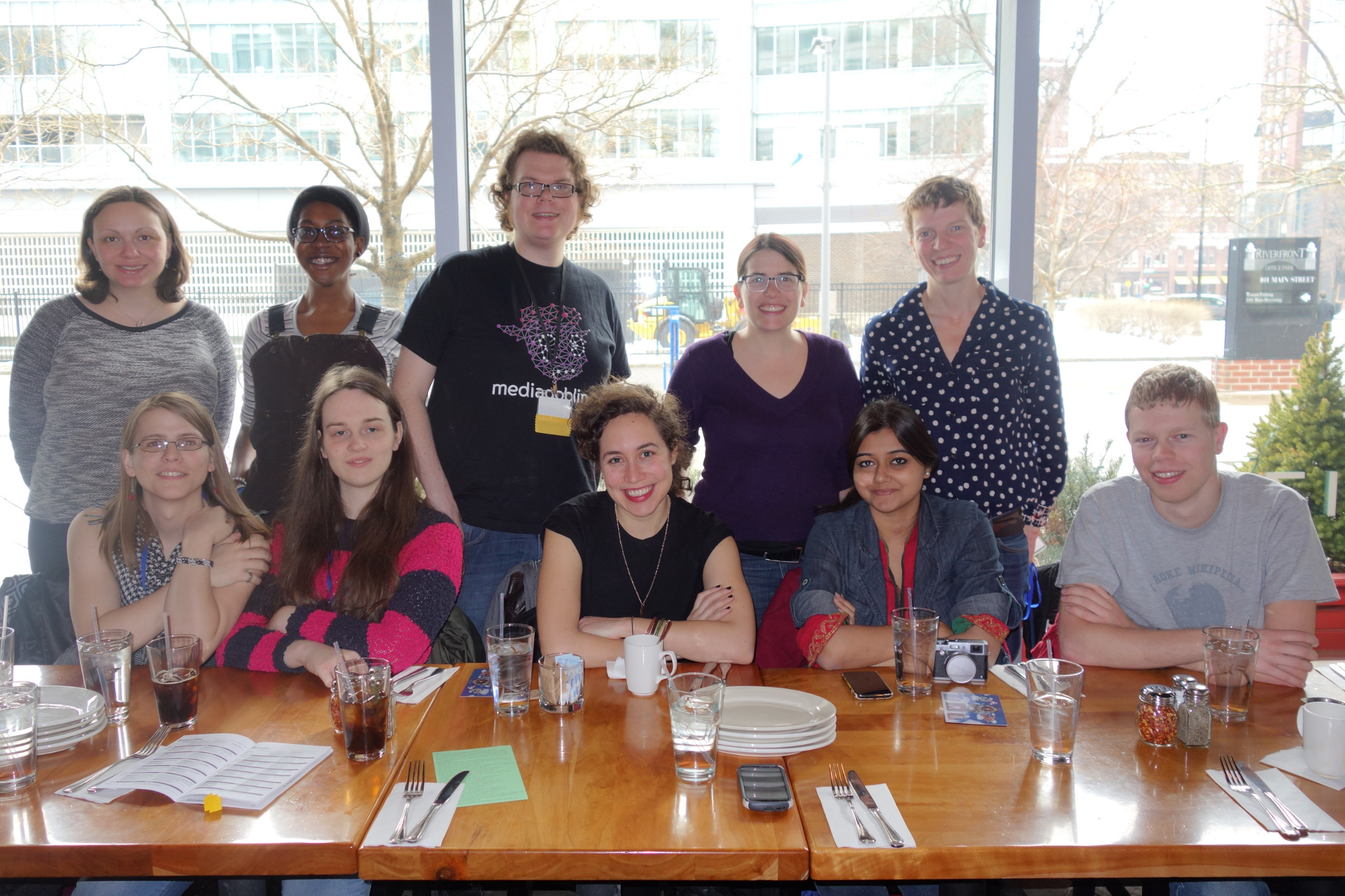 Outreachy alums and mentors at LibrePlanet 2015.

What are your hopes for the free software community in the next thirty years?

I hope that more developers and other technology contributors seek out opportunities to work on free software as their job. I would like to see more business, entrepreneurial, non-profit, academic, and government organizational infrastructure for free software development. In particular, all software developed or purchased with public funds should be free software. I would like to see free software in mainstream critical devices, such as medical and automotive, and in modern consumer products, such as mobile phones. Free software solutions need to offer a compelling user experience, so that people opt for them without having to compromise convenience. These compelling solutions will also help spread the message of software freedom. I hope that moving to free software as a default from the developer and consumer perspective, will incentivize existing companies to open the code of their core services and to allow verification and decentralization of them. Finally, I hope that free software contributors and enthusiasts will come from a variety of diverse backgrounds, and we will either no longer need Outreachy or will dramatically change who it's targeted toward.

The application deadline for the upcoming round of Outreachy internships is November 2, and the internship dates will be from December 7 to March 7. Now is a great time to learn about the participating communities, work on the required contribution with the help of a mentor, and apply. You can encourage others to apply by using the prepared e-mail message, social network updates, and the flyer. You can get your company to sponsor Outreachy or make an individual donation to help it grow and fund more internships.

Thanks to Marina Zhurakhinskaya for this in-depth conversation. Please help us recognize standouts in the free software community: To nominate an individual for the Award for the Advancement of Free Software or a project for the Award for Projects of Social Benefit, send your nomination along with a description of the project or individual to award-nominations@gnu.org by November 1st, 2015. Apply here to present a session at the next LibrePlanet, which will take place March 19-20, 2016, in the Boston area -- submissions are due November 16, 2015, at 15:00 UTC. To read more about more women in free software, check out our previous Ada Lovelace Day posts from 2014, 2013, 2012, and 2011.

Thanks to FSF Member Alan Mainwaring for telling us about the Science Museum's construction of Babbage's Difference Engine. All images courtesy of Marina Zhurakhinskaya/CC BY-SA. You can view this post on the Web at https://www.fsf.org/blogs/community/ada-lovelace-day-2015.