You can support digital rights in 2008!

Watch the appeal video in a window (Ogg Theora)

At the 2007 annual Associate Members meeting held in March at MIT in Cambridge, the FSF board and staff gathered with members from around the world to discuss our activities and the tremendous successes we have had together in the past year. We fought Digital Restrictions Management through our DefectiveByDesign.org campaign, released version 3 of the GNU General Public License to help neutralize anti-free-software laws like the Digital Millennium Copyright Act and defend against Microsoft's attempts to make free software proprietary through patent promises, released the GNU Affero GPL to support developers building network server software, supported fully free software distributions like gNewSense, backed high-priority software development projects like the free Flash player Gnash, and saw the continued success of our campaign to lift the "Java trap" with Sun's ongoing release of the Java platform under the GPL. Finally, following on from our discussion at the beginning of 2007 with major manufacturers and our release of the white paper, "Hardware Free From Restrictions," general-purpose computers are now available from major retailers with free software preloaded. 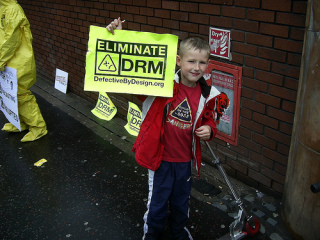 But we weren't just looking backward. We also discussed the many challenges facing the free software movement, and what our priorities should be in 2008 to ensure everyone's ability to run a completely free operating system.

The major issue we isolated is the threat of software patents. Beyond individual patent claims that can make developing any software program akin to crossing a field of landmines, there is the very dangerous threat posed by Microsoft and the broad unspecified claims they are making against free software in an effort to pressure corporations and free software distributors to pay them a tax for the distribution of free software. I can tell you, that the Free Software Foundation has received many tip-offs of companies being strong-armed by Microsoft to pay to use free software--the software our community created. 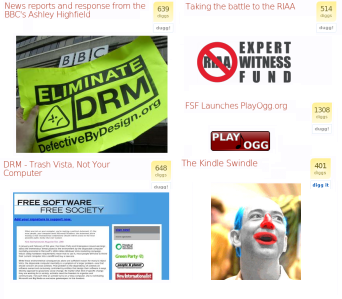 During our meeting, associate member Jack Whitley highlighted a book on software patents written by Ben Klemens, titled Math you Can't Use. Jack suggested we send a copy to every US lawmaker, and key judges. He said the book was a powerful argument for how the accepted understanding--that there was little anyone could do about software patents in the US--was wrong. I read the book and was also convinced that there are actions we can take and that the elimination of software patents is in fact possible. I am pleased to say that Klemens is now the director of EndSoftPatents.org, and inside the current issue of the Bulletin he introduces our supporters to the history of software patents. The EndSoftPatents.org campaign will educate the public to the truth about software patents: how we can abolish them through legal action, and how we can campaign with others to push for legislative action.

It is your financial support that will make this campaign a success. If you have a website of your own, please also encourage others to contribute by adding the member sign-up widget available at fsf.org to your pages. Funds will enable us to support necessary legal action and to rally public support behind this campaign's message and our broader message in support of the freedoms all computer users should have.

The following photos are used in the video: